How Important is the Investigation in a Bus Accident?

In the aftermath of any type of bus accident, there will need to be an extensive investigation into the incident. Often, law enforcement officials conduct thorough investigations at the scene, but other investigations will likely be done by insurance carriers and legal teams involved in any pending personal injury claims. Investigations are important, particularly as individuals look to recover compensation for their losses. It must be determined who caused the accident or whether or not there was any shared fault for the incident. 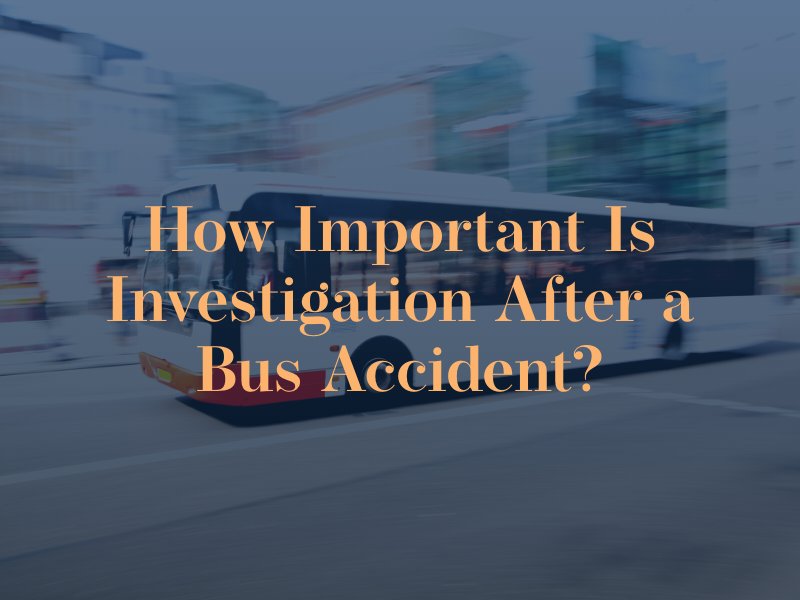 What Is The Investigation Process After a Bus Accident?

An investigation must be conducted in order to ensure that liability is properly assigned. After a bus crash occurs, there will likely be many parties who have sustained injuries or property damage that will initiate injury claims. This investigation will be carried out not only by law enforcement at the scene of the incident but also by insurance carriers, legal teams, and possibly even regulatory agencies, depending on the type of bus that crashed.

Types of Evidence Gathered After a Bus Crash

There will be various types of evidence gathered after a bus crash occurs. This includes what you would typically think of as being important after a crash, including photographs from the scene of the incident, video surveillance from nearby cameras, as well as statements from eyewitnesses, other drivers, and passengers.

However, there are other types of evidence that will be gathered, particularly for commercial buses. This includes an electronic logging device (ELD) and an electronic control module (ECM) from the bus. The ELD keeps track of commercial bus driver’s hours of service, and the ECM acts as the black box device that records information about the vehicle from around the time the crash occurred.

In addition to this evidence, information pertaining to the bus maintenance and inspections, driver’s driving history, driver’s training, and company safety records will likely be obtained.

How A Bus Accident Attorney Can Help

Going up against bus companies, their insurance carriers, and their legal teams can be challenging. Any person who has sustained an injury caused by the negligent actions of a bus driver or bus company needs to speak to an attorney as soon as they can. A Santa Ana bus accident lawyer will use their resources to get involved quickly and conduct a thorough investigation into the incident. The role of an experienced personal injury attorney in Santa Ana is multifaceted and will also include handling all communication with other parties while also ensuring that their client is evaluated by trusted medical and economic experts.