The family of a 6-year-old boy who lost much of his lower jaw to an infection is suing the Anaheim dental clinic where the child and dozens more were affected by a bacterial outbreak.

The lawsuit, filed Wednesday in Orange County Superior Court, alleges negligence, medical battery, intentional misrepresentation, concealment and intentional infliction of emotional distress, among other claims. It was filed on behalf of Freshta Ahmadi and names dentists Jerry Minksy and Trinh Pham and the Children’s Dental Group.

Attorney Daniel Callahan alleged in the complaint that the dentists should have known there was a problem with the pulpotomy procedure, which led to the infections, and did not tell patients about the issue.

Freshta has lost half of his bottom jaw, Callahan said.

“It’s been happening again and again and they should have known” there were problems, Callahan said.

County Healthcare Agency officials determined the bacteria came from the dental office’s water system and forced the clinic to re-do the plumbing. 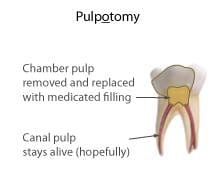 Callahan also alleged the pulpotomy procedure – which he called a “baby root canal” – is usually unnecessary but the dentists order them to take in insurance money.

“They didn’t clean the water and equipment,” he added.

“Some of that bacteria caught in the crown, leading to further pain and infection,” he said of his client. “The infection went into his lungs and he’s still on his antibiotics for the next four to six months.”

Callahan said that “at a minimum” 70 of the dental group’s patients have or will sue. It’s possible the legal actions could morph into a class action lawsuit, he said.

“Right now these cases are filed individually, but at a minimum they will be consolidated,” he said.

The lawsuits contain the same allegations for the most part, he said.

As of Tuesday, county health officials said they have logged 58 cases with 20 confirmed to be infected and the rest probably infected. All 58 people have been hospitalized at some point. The children affected range from 2 to 10 years old and they underwent pulpotomy procedures from March through Aug. 11.

Freshta went in for his procedure on June 30, “and by that time they already knew they had problems,” Callahan said.

“They had to go back in there because of the swelling (on July 11),” Callahan said. “Just in those 12 days our client exhibited all the signs that would put anybody on notice.”