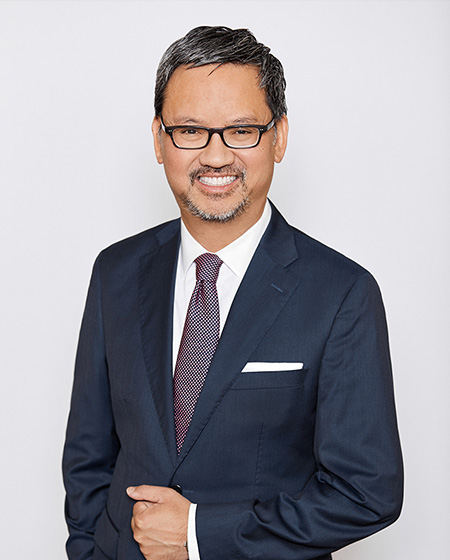 Raphael Cung is a senior attorney with Callahan & Blaine with over 20 years of experience in complex business and corporate litigation, as well as the representation of plaintiffs with catastrophic personal injuries. As an Orange County business attorney and Santa Ana personal injury lawyer, Raphael has appeared in state and federal courts throughout California and in other states, as well as multiple arbitration proceedings.

Raphael is especially versed in difficult federal and state court procedures.  Working with other Callahan & Blaine attorneys, Raphael has achieved among the following favorable results for the firm’s clients:

Among Raphael’s previous accomplishments are the following: successfully representing a major film studio suing over a “knock-off” TV show, which made new case law interpreting the federal Lanham Act; obtaining a walk-away settlement after filing a summary judgment motion in a dispute involving a $17 million real property; defending corporate directors and officers sued for breach of fiduciary duties in connection with a “going private” tender offer, which allowed the $600 million transaction to go forward; winning a motion for a new trial for a client casino resort suing over defective gaming equipment after the court initially granted a directed verdict; winning summary judgment for a real estate brokerage sued for the acts of an employee who had a side business, a result upheld by the California Court of Appeal; and obtaining complete vindication for a corporate president sued for $300 million involving the estate of a prominent billionaire, whose network of companies the client oversaw for 25 years, a case that was written about in Vanity Fair.

Raphael previously practiced with O’Melveny & Myers and Greenberg Glusker in Los Angeles.  He has been selected as a “Rising Star” by California Superlawyers.

Before attending the University of Virginia School of Law, Raphael served for 4 years in the U.S. Department of Commerce in Washington, D.C., where he formulated trade policy toward East Asia.

Raphael was born in Saigon, South Vietnam and is a naturalized U.S. citizen.  His family fled the country on the last day before Saigon was overtaken by Communist forces. Raphael is a native speaker of Vietnamese.