Hinkley residents have filed a class action lawsuit against Pacific Gas & Electric for contamination of the water supply in the Mojave Desert town with hexavalent chromium and other chemicals, their attorney, Daniel Callahan, said. 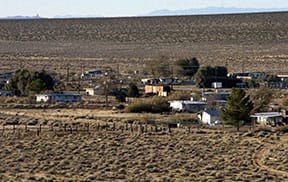 During the 1950s and ’60s, PG&E used hexavalent chromium, also known as Chromium-6, to kill algae and protect the metal at its natural gas pumping station in Hinkley. The plume of contaminated groundwater has been growing ever since and is now known to be about 2 miles wide and 6 miles long.

PG&E has been providing bottled water for residents in the town west of Barstow.

Hexavalent chromium is a highly reactive chemical that damages cells. The known health effects range from skin irritation to lung and stomach cancers. In the 1990s, hundreds of Hinkley residents claimed illnesses and other damages stemming from the contaminated water.

In 1996, Erin Brockovich helped more than 600 Hinkley residents win $333 million in settlements from PG&E for cancers and other illnesses they blamed on the chromium-tainted water from their wells. Their story was made famous in the 2000 movie “Erin Brockovich.”