What Is a DOT-Recordable Accident?

Most drivers in California are aware of the “point system” used by the state DMV. This is the system in which each traffic ticket violation is assigned a point value. These points are added to your driving record, and once you exceed a certain number of points, you could lose your driving privileges temporarily or permanently. The Federal Motor Carrier Safety Administration (FMCSA) maintains a similar point system used to track the safety record of companies that use commercial drivers. When an incident happens that could count against a commercial vehicle driver’s license, this would be considered a DOT-recordable accident. 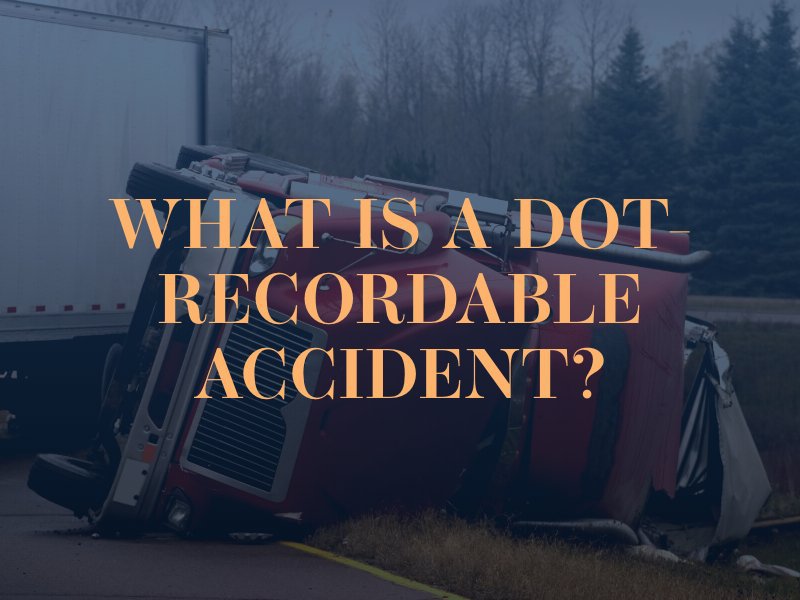 The FMCSA operates under the federal Department of Transportation (DOT) and requires that motor carriers keep track of serious accidents involving commercial motor vehicles (large trucks, buses, etc.). Any accident that meets the FMCSA’s criteria to be recorded is called a DOT-recordable accident. Because most motor carriers operate across state lines, they will be required to follow the guidelines set in place by the FMCSA.

Any accident involving a commercial motor vehicle that meets the following criteria will be considered a DOT-recordable accident:

When determining whether or not an accident is DOT-recordable, federal regulations do not consider which party was at fault or whether or not the accident could have been prevented.

How Does A DOT-Recordable Accident Get Reported?

All DOT-Recordable accidents must be recorded in an “accident register.” The following information must be reported:

This information must be maintained by the motor carrier for a minimum of three years and made available to any agent of the FMCSA or the US DOT, any authorized state or local law enforcement agency, or any authorized third party. Regulations also require motor carriers to assist in the investigation of these records.

How Is DOT-Recordable Accident Information Used?

The US DOT wants to ensure that the roadways are safe, and this information will be used to determine whether or not a motor carrier is doing their part to ensure roadway safety. The FMCSA will take the number of DOT-recordable incidents the motor carrier has been involved in, multiply that number that one million, and then divide that number by the number of miles driven by the motor carrier in the past 12 months. The resulting number will be the carrier’s safety rating.

This safety rating is only one of six factors that the FMCSA uses to determine a motor carrier’s Safety Fitness Determination (SFD). However, motor carriers with a safety rating of more than 1.5 accidents per one million miles will receive an “unsatisfactory” rating. Carriers that receive an overall “unsatisfactory” SFD can face serious penalties if they do not take corrective actions. If you or a loved one was injured in an accident caused by a negligent truck driver or company, speak with a qualified Santa Ana truck accident attorney at Callahan & Blaine to learn more about your legal options.